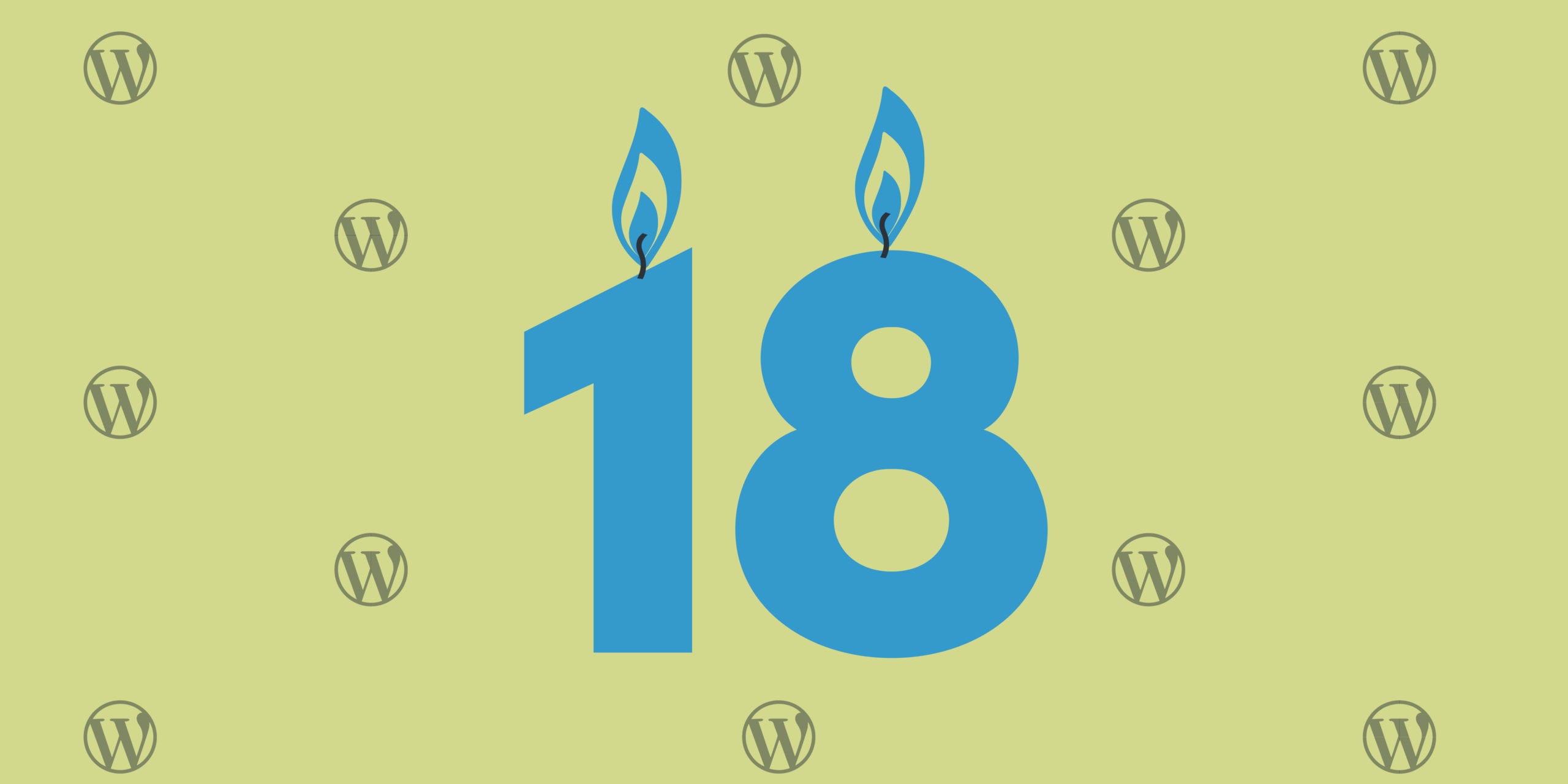 On this day 18 years ago WordPress was released for the first time. Let’s look at some interesting facts about the world’s most used website building software.

You probably haven’t heard of b2/cafelog – a blogging tool created by the French programmer Michel Valdrighi in 2001. It was designed for writing blogs by generating pages dynamically, which was a major innovation 20 years ago. Besides that, b2 is both the predecessor of WordPress and the reason of its existence.

The Birth of WordPress

In the end of 2002, Valdrighi stopped maintaining b2/cafelog without any notice. Matt Mullenweg, who was actively using Valdrighi’s software for his travel blog, was concerned about the lack of developer’s support:

“My blogging software hasn’t been updated for months, and the main developer has disappeared, and I can only hope that he’s okay… Fortunately, b2/cafelog is GPL, which means that I could use the existing codebase to create a fork, integrating all the cool stuff that Michael would be working on right now if only he was around…”
~ Matt Mullenweg

On May 27th 2003, WordPress 0.7, the first version of WordPress was released by Matt Mullenweg and Mike Little

As a student, Matt studied jazz saxophone. His love to jazz music resulted in the famous “Hello Dolly” demo, which can be seen in every release since 2004. The plugin serves as a tribute to Louis Armstrong:

“Hello Dolly symbolizes the hope and enthusiasm of an entire generation summed up in two words sung most famously by Louis Armstrong.”
~ Matt Mullenweg

Today, 18 years after its first release, WordPress is powering 41% of all existing websites. With its countless features and plugins, it has become the most preferred website builder all around the world. WordPress has won a number of awards and is continuously extending its functionalities and support.

Here at Boldit Studio we follow the latest trends in web design and do our best to create unique online identities for our customers, making sure their presence will not be left unnoticed. This would’ve been much harder and not so much fun without the flexibility, reliability and user-friendliness of WordPress. So cheers to that and happy 18th birthday, WordPress!

Share this on social media
#previous
next$
We use cookies on our website to give you the most relevant experience by remembering your preferences and repeat visits. By clicking “Accept All”, you consent to the use of ALL the cookies. However, you may visit "Cookie Settings" to provide a controlled consent.
Cookie SettingsAccept All
manage consent

This website uses cookies to improve your experience while you navigate through the website. Out of these, the cookies that are categorized as necessary are stored on your browser as they are essential for the working of basic functionalities of the website. We also use third-party cookies that help us analyze and understand how you use this website. These cookies will be stored in your browser only with your consent. You also have the option to opt-out of these cookies. But opting out of some of these cookies may affect your browsing experience.
Necessary Always Enabled
Necessary cookies are absolutely essential for the website to function properly. These cookies ensure basic functionalities and security features of the website, anonymously.
Functional
Functional cookies help to perform certain functionalities like sharing the content of the website on social media platforms, collect feedbacks, and other third-party features.
Performance
Performance cookies are used to understand and analyze the key performance indexes of the website which helps in delivering a better user experience for the visitors.
Analytics
Analytical cookies are used to understand how visitors interact with the website. These cookies help provide information on metrics the number of visitors, bounce rate, traffic source, etc.
Advertisement
Advertisement cookies are used to provide visitors with relevant ads and marketing campaigns. These cookies track visitors across websites and collect information to provide customized ads.
Others
Other uncategorized cookies are those that are being analyzed and have not been classified into a category as yet.
SAVE & ACCEPT
Powered by